Antibiotics May Be Linked To Miscarriage

According to the March of Dimes, up to 10% of expecting moms will get a urinary tract infection or UTI, during their pregnancies. Of these, about 25%, if left untreated, can develop into kidney infection, which can life-threatening for both mother and child. However, the good news is that as long as a UTI is caught early enough, it can be easily treated with antibiotics, right? Well, yes and no. While antibiotics can be a safe and effective treatment for UTIs, there are some new revealing studies that pregnant women will want to know about before taking them.

Antibiotics and Miscarriage
A recent study published in the Canadian Medical Association Journal has found some eye opening links between antibiotics and miscarriage in pregnant women. The prevalence of UTIs in pregnant women and their likelihood to be treated with antibiotics make this an issue of concern. A study done by researchers at the Universite de Montreal collected data from 182,369 pregnant women in Quebec between the years of 1998 and 2009, 8,702 of which ended in miscarriage before the 20th week of pregnancy. Of these, 16 percent occurred after the women took antibiotics.

Antibiotics to Avoid
Although all of this may be enough to scare you off antibiotics during pregnancy entirely, you should know that there are some medications which are higher risk than others. The most dangerous drug classes are tetracyclines, which is used as a treatment for acne, and quinolones, which can be used on a variety of infections, and was a common culprit in causing miscarriage, increasing its likelihood by three times. Clarithromycin, prescribed for pneumonia and bronchitis multiplies the risk by two. Azithromycin, used for infections of the respiratory system and some STIs, increased the of miscarriage risk by 60%, while metronidazole, used to treat bacterial vaginosis, increased the chances by 70%. Trimethoprim and sulfamethoxazole upped the risk by 25%.

Expert Advice
While it may seem as if there are no safe alternatives, Sherry Ross ob-gyn at Providence Saint John’s Health Center has some insight on the subject: If you notice symptoms of UTI, you definitely want to inform your doctor; if left untreated they can lead to preterm birth, kidney infection, and preeclampsia. Your doctor should recommend going with safer antibiotics, such as nitrofurantion, cephalosporin, penicillin, and erythromycin. All of these are safe antibiotics with a broad range of uses. Ross says, “Most important is to make sure you discuss the pros and cons of UTI options with your obstetrician and ways to avoid recurrent infections during the rest of the pregnancy, If you are trying to conceive and are unsure of your pregnancy status, you would want to make sure you are taking the antibiotics not associated with an increase in miscarriage risk.”

Have you experience UTI during pregnancy? How did you handle it? What’s your expert advice? Let us know!

Your Chicken Should Be Antibiotic Free

The dating world can be scary these days. Everyone is looking to have Fun Ways To Move Morefun, but when it comes to starting long term relationships, you need to know some vital information about your partner’s past. After all, if your going to be putting parts of a person’s body into your body, you need to know where those body parts have been. The same can be said of your chicken. If that chicken is going to be in your mouth and stomach, you should know a little about this chicken, especially whether of not this chicken is antibiotic free. Why? Read on to find out.

Harmful to Human Health
The use of antibiotic on farm animals have been amped up in recent years. Fifteen to seventeen million pounds go the drug are freely administered on a yearly basis. The goal of this is not only to keep animal healthy in general, but also to prevent sickness in animals raised in unsanitary conditions. The results have been anything but healthful. The overuse of antibiotics has resulted in the evolution of antibiotic resistant bacteria strains, superbugs, if you will, and, since poultry products usually carry more than one bacterial strain, it is becoming more likely the meat you buy is contaminated.

In fact, a recent study from the Environmental working group found that 81% of ground turkey, 69% of pork chops, 55 % of ground beef, and 39% of chicken wings and thighs are tainted with antibiotic-resistant strains of bacteria like E. coli and salmonella.

Add to that the fact that the antibiotics used to treat chicken are similar to those that are used on humans and the threat to public health increases. Dr. Glenn Morris says that humans who ingest the resistant bacteria may not respond to antibiotic treatment. The risk for children is higher due to less mature immune systems. 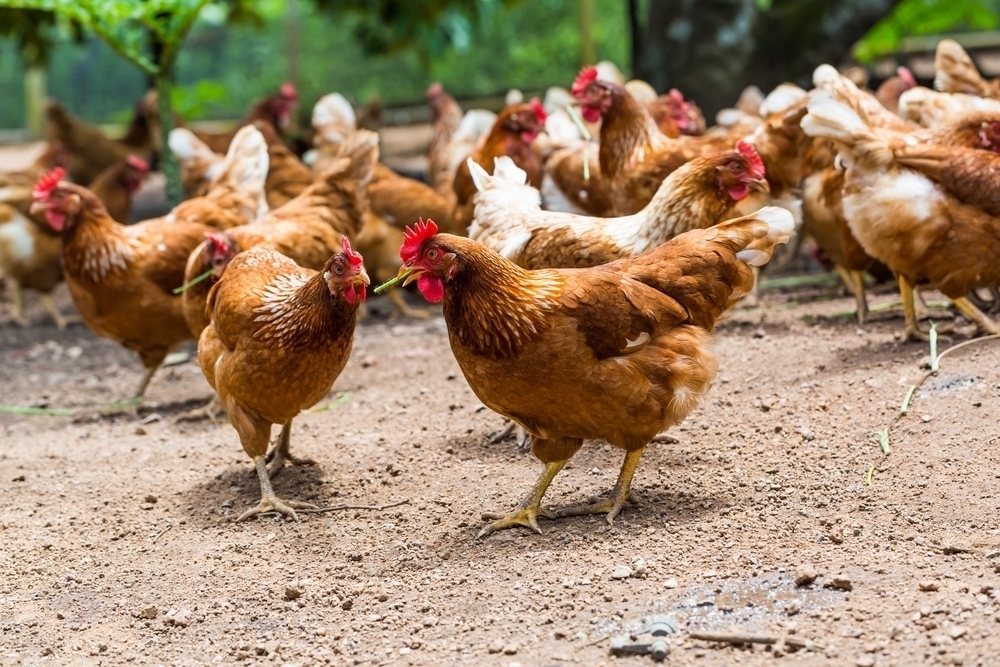 Government Response
It would not be an exaggeration to say our government’s response to this danger was underwhelming. In 2013, the FDA declared a “voluntary strategy” asking that drug companies limit the amount of antibiotics in animal feed. While the association released a statement acknowledging the use of antimicrobial drugs as “an important health concern,” and recommended “judicious use of the drugs, the call carries no penalty for failure to comply and is open to ambiguous interpretation.

Antibiotic Chicken
Despite the weak response from the FDA, consumers can be proactive in avoiding the consumption of contaminated chicken. A 2012 Consumer Reports studies found antibiotic free products at 119 stores, including, Whole Foods, and Trader Joe’s. The “no antibiotics” chickens were reasonably priced and, in some cases, actually cost less than the average price of chicken breasts nation-wide. Panera Bread is a leading restaurant in the increasing availability of antibiotic-free products, including chicken, pork. and turkeys, a trend that we will hopefully be seeing more of in the near future. Until then, you can keep yourself informed at RealTimeFarms.com.

What are you doing to avoid eating unhealthy foods? Let us know! We want to hear your recommendations and suggestions!