Normally, when one thinks of nudist colonies, one thinks of images of nature, free love, lack of inhibitions and a return to innocence. What they may not think of is skin cancer. Cancer of the skin is the most common type of cancer. According to the American Cancer society, about 76,380 melanomas will be diagnosed in 2016.

There are two types of skin cancers: melanoma and non-melanoma. Melanoma is the most dangerous form and is likely to spread other parts of the body. It begins in the deepest layer of the skin. Non-melanoma is less dangerous and can usually be surgically treated. It is found in the upper and middle layers of the skin.

Melanoma Signs
The first sign of melanoma is typically a growth on the skin or a change in a mole that you have had for a while. While normal moles tend to arrive at an early age and remain unchanged, it is quite a different story with melanoma. They are more likely to appear suddenly and change rapidly.

The ABCDE
The Melanoma Research Foundation suggests that you use the ABCDE method to classify and identify melanoma.

A- Asymmetrical Shape: While benign moles tend to be symmetrical, melanoma moles are usually shaped irregularly.
B- Border: Melanoma lesions tend to have unclear borders and blurred outlines, whereas non-malignant ones have smooth, well- defined borders.
C-Color: Melanoma lesions are often characterized by several unevenly distributed colors, usually blue, tan or black.
D- Diameter: Melanoma lesions often measure more the 6 millimeters in diameter.
E-Evolution: The most telling sign that your lesion is cancerous is its evolution, If you notice the mole changing in size and color, contact your dermatologist.

When You Should Worry About A Pre-existing Mole
Moles are common and are usually the result of a normal reaction to the sun. However, you may consider having a mole checked out if you experience:

Non-melanoma Skin Cancer
The Uk National Health Service Reports that, “The main symptom of non-melanoma skin cancer is the appearance of a lump or discolored patch on the skin that won’t heal.'”The most common types are basal cell carcinoma and squamous cell carcinoma.

Basal Cell Carcinoma
Although it is not known to spread to other areas of the body, basal cell carcinoma can result in disfigurement if it is not cared for properly. It can be identified by:

Squamous Cell Carcinoma
Usually caused by overexposure to the sun, squamous cell carcinoma can spread to other areas of your skin, although widespread carcinoma is unlikely. Look out for:

So, if you want to take your clothes off in the sun, just remember to keep your sunblock on and if you notice any changes in your skin, please go see a dermatologist asap!

Common Guy Skin Issues and How to Fix Them

Because the composition of male skin is different than females, it also comes with a different set of common issues. Like females, guy skin issues can occur at any point during life and it’s best to be as prepared as possible and to take preventive measures when appropriate. Below, Resveralife discusses some of the most common guy skin issues and include how you can fix them to get the best skin possible. 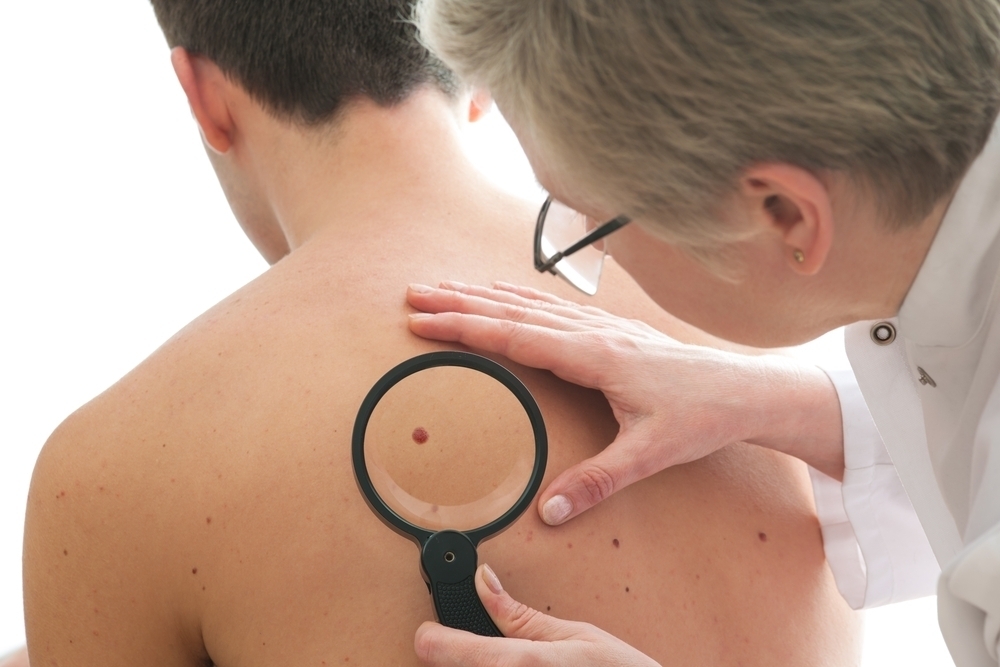 Skin Cancer
Starting off on a serious note, men are more likely to get skin cancer than women are. A 2013 study found that one in every 50 men suffer from melanoma (the deadliest form of skin cancer), while only one in 35 women will deal with melanoma. A possible contributing factor to the men being more prone to melanoma is that men, generally speaking, do not apply sunscreen as regularly as women leaving them unprotected against harmful UV rays.

In order to fix this skin issue, wear sunscreen every time you are going to expose yourself to sunlight (yes, even in the middle of winter). Experts recommend applying a broad-spectrum SPF of 30 or higher about 20 minutes before you plan to be outside. You should use about a full ounce (a shot glass full) to cover your face and body. No matter how long-lasting a bottle says the protection is, reapply your sunscreen every two hours or after you immerse yourself in water. 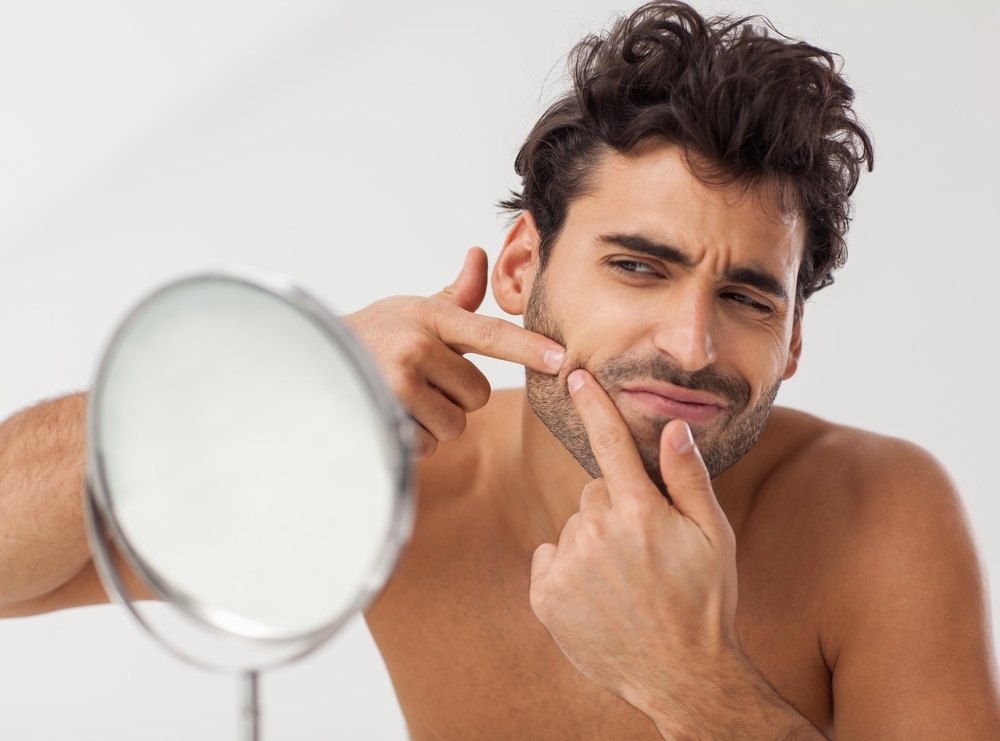 Excess Oil
Everyone is susceptible to oil production, but men have two times the amount of oil glands that women do. Not only do guys have double the number of oil glands, but they also produce five times more sebum (oil) than women do. Why do men make so much oil? The male hormone, androgen, is largely responsible for sending the signal to secrete sebum. This leads to oily skin and can be a major contributing factor in male acne.

Fixing this skin issue can be a bit tricky because acne affects people in different ways. First, finding a cleanser that has benzoyl peroxide or salicylic acid in it is a great way to begin the fight against acne and oil. Another important way to cure this problem is to remember to exfoliate regularly, two or three times a week. You can do this using  scrub designed to slough off skin cells or you can use a chemical exfoliant (that can be used daily) to clean out pores, remove dead skin cells and fight excess oil. 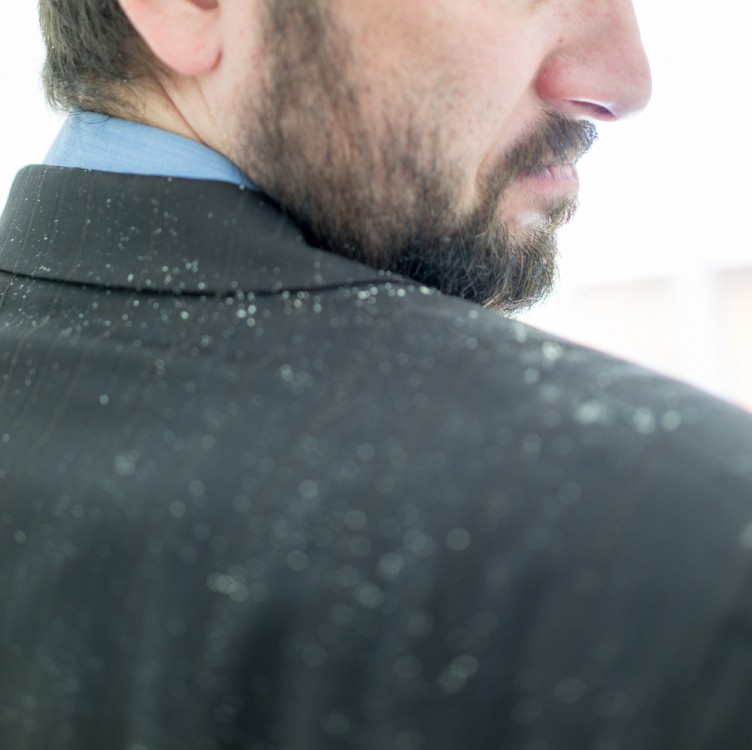 Flakes
Dandruff affects both men and women and occurs when yeast reacts to the excess oil produced by men’s oil glands. Often, dandruff manifests as itchy, flaky skin in white or slightly yellow colors. The areas affected by dandruff also tend to become red and in men, it is especially possible for the condition to spread to the face in areas such as between the eyebrows and around the nose.

The first line of defense in fixing this skin issue is to grab an over-the-counter dandruff shampoo with pyrithione zinc. If this does not work, try an apple cider vinegar treatment. Mix one part apple cider vinegar with two parts water and apply to hair. Let that sit for about 20 to 30 minutes then shampoo. If you are still struggling with flakes, head to the doctor and see what your options are.

Male skin definitely comes with a unique set of issues, but luckily they all have fixes. Take good care of your skin and use preventive measures, like sunscreen, to help avoid more serious skin issues later in life.

Summer is just around the corner and you can’t wait to throw on your bikini and relax in the warmth of the sun. But before you do, perhaps you feel the need to get a golden glow from a tanning bed so you don’t look too pale when you hit the beach. If you frequent the a tanning salon, or even go year-round, you can maintain a beautiful bronzed body, but you may also have some more serious issues at hand than simply doing damage to your skin.

What is a Tanning Addiction?
It may sound silly, but there are numerous studies and research that indicate that it is possible to be addicted to tanning. A paper published online by the Journal of the American Academy of Dermatology found that females were far more likely to have an addiction to tanning than males were. Additionally, the study found that there were other conditions that were associated with a tanning addiction in a large number of those studied. The two most commonly associated behaviors that were observed among tanning addicts were some measures of obsessive-compulsive behaviors and body dysmorphic behaviors.

Frequent tanning is also associated with unhealthy practices such as smoking, alcohol use, illicit drug use and eating disorders. In addition to these increased behavioral risks, tanning also is linked to higher incidences of premature aging, sun damage and skin cancer. 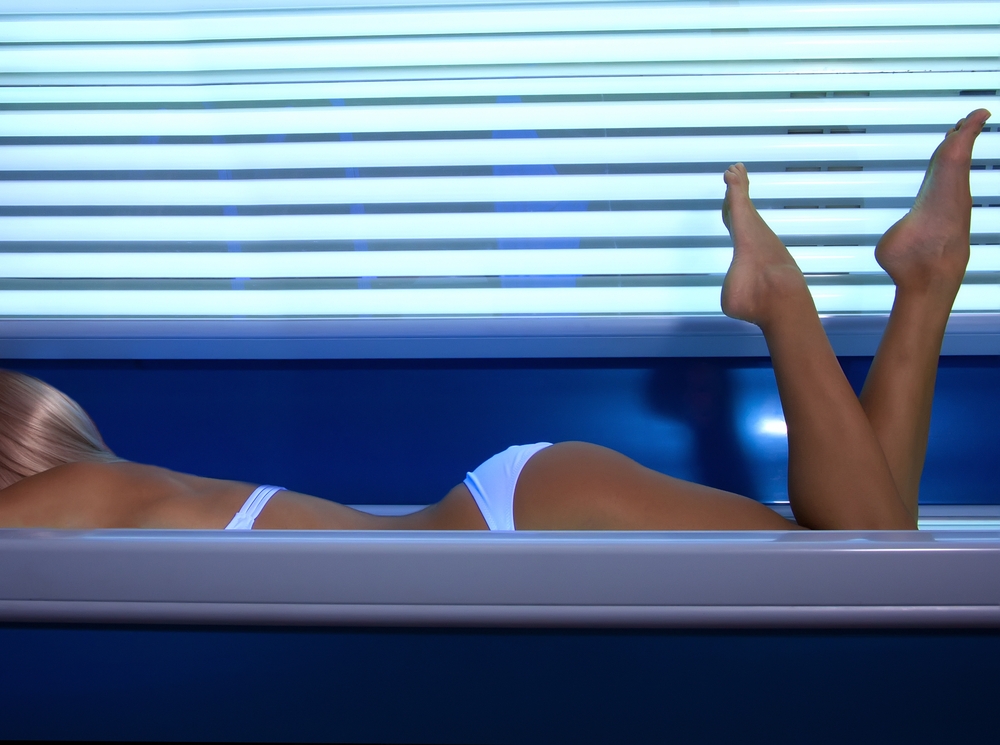 What Causes a Tanning Addiction?
Here is where the research gets a bit unclear. There are certainly known risk factors that contribute to possible tanning addictions. One possible factor in a tanning addiction is the release of endorphins when tanning. Exposure to UV light is known to release endorphins which are opiod-like chemicals in the brain. These chemicals increase feelings of general happiness, increased mood and even relieve pain. This process, the relief of pain and positive emotions is the same cycle responsible for other chemical dependencies such as alcohol or drugs.

What You Can Do
As with any addiction, prevention of an addiction is easier than treatment of an addiction. Dermatologists suggest public education on the dangers of tanning beginning in early childhood. Educational information should also be directed at parents and other caregivers on how to stay safe in the sun, and how to avoid tanning.

If you already think that you may have a tanning addiction, not all hope is lost. The first thing you should do is cancel any subscription-type services at your tanning salon. Not having advanced paid tanning sessions makes it easier to avoid hitting the tanning beds. Next, address the issue of endorphins through other activities. Experts suggest tanning addicts engage in some exercise when a desire to tan attacks. Exercise is a healthy source of endorphins. Lastly, if you absolutely need to be bronze, check out self-tanning products to give you the glow without the damage.