Please ensure Javascript is enabled for purposes of website accessibility
October 24, 2014  by Mayank 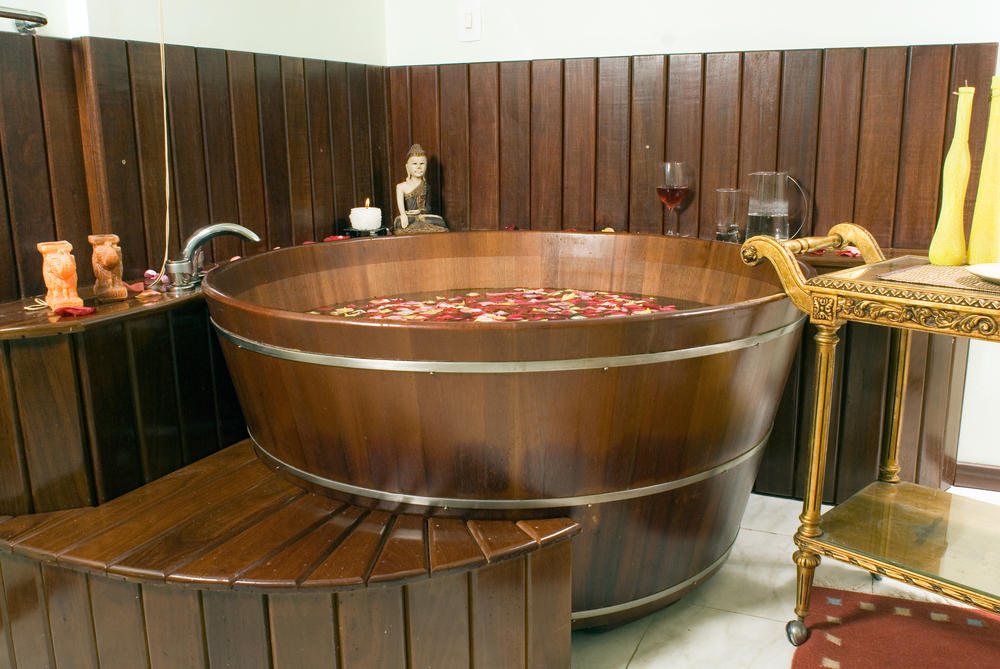 Millions of people all over the world are known to love their few glasses of wine but, the way we look at wine has been quickly changing. Many among the rich and the famous are not just drinking those magnificent labels, they are actually bathing in them. One of the biggest patrons of wine bathing is Amar’e Stoudemire. Stoudemire actually created quite a furore on social media when he posted a photo in which he was covered with red wine up to his neck on his Instagram account.

The concept of bathing in red wine is nothing new either. It might seem to be a childhood prank, but the treatment has actually been used by the rich and the famous ever since the 1900s. This process is known as Vinotherapy. Vinotherapy is basically a process which requires one to immerse into wine-grape leaves, vines, branches and skin. Bathing in this mixture for about 30 minutes, once a week, can work wonders for your skin. Those who practice Vinotherapy believe that the process helps them to increase the circulation of their red blood cells and offers them with a rejuvenated feel.

Mathilde Thomas was touring her parents’ winery in the year 1993 when she was asked a question, “What becomes of the seeds, red grape branches and vines?” The guest who actually asked this question was a professor who believed that the oils found in these red wine grape seeds were much more effective in preventing wrinkles than the popular antioxidant Vitamin E. This chance encounter led to expansions in the concepts of Vinotherapy by Bertrand and Mathilde Thomas, who later introduced the concepts in their own skin care line as well.

How does Vinotherapy work?

The objective of Vinotherapy is to treat a person with products that are rich in the polyphenols that are found in red wine grapes. These compounds are usually found in branches, vines and the skin of red grapes, items that are usually discarded during the wine manufacturing process. It is believed that when these polyphenols are applied to the person’s skin, they can help in masking free radicals and revealing youthful looking skin. One of the most powerful polyphenols found in these items is Resveratrol, a compound that has already proven to be highly effective when it comes to skin care.Vinotherapy treatments include a variety of massages, scrubs and body wraps using grape skin and barrel baths which allow people to bathe in a combination of red vine leaf stock and water.

Can Vinotherapy be backed by scientific data?

Those who believe in the wonders of Vinotherapy believe that it not only helps out with anti-aging, it also has anti-cancer benefits to offer. Dr. Edwin Frankel had released a study in the year 1993 which claimed that polyphenols actually offer powerful antioxidant properties to the human body. A study led by Richard Sinclair in the year 2006 also backed the importance of Resveratrol in the human body. His study showed that Resveratrol helped in offsetting the negative effects of high calorie diets in mice and that it also helped in increasing their lifespan. Sinclair worked on another study in the year 2013 in which he showed that the SIRT1 genes of the human body could be activated because of Resveratrol. It is believed that these genes control the aging process.

Other patrons of Vinotherapy

Stoudemire might have given Vinotherapy a lot of publicity, but he is not the only athlete or celebrity who enjoys this unique style of pampering. Some of the other popular names who are said to believe in the wonders offered by Vinotherapy include Patrice Evra (French footballer) and Tony Parker (San Antonio Spurs future Hall of Fame guard).

So will bathing in red wine actually help?

According to medical experts, alcohol in any form is never good for the skin. The only effect that alcohol has to offer is that it dries out the skin. If one is really looking to enjoy the wonders of Vinotherapy, one needs the items that get discarded in the process of making wine – the branches, vines and the skins. Moreover, one also needs fine mini-jets like the ones found in a Jacuzzi so as to allow the mixture to work with the muscles and improve the blood circulation. A simpler alternative would be to use a Resveratrol based skin care product. It might not be able to give you the purported health benefits that Vinotherapy supposedly has to offer, but it can definitely help you rejuvenate your skin and boast of a younger and firmer looking skin.